Woolloongabba Art Gallery’s newest exhibition is from Milingimbi or Yurrwi in eastern Arnhem Land. This collection is representative of some of the latest trends happening at Milingimbi Art and Culture in 2017. The vibrant nature of the Art Centre is reflected in the mix of male and female artists as well as a variety of media and techniques.

The lively painted wooden bird sculptures reflect the abundance of bird life amongst the mangroves of the Crocodile Islands. Animal sculptures are the domain of the men including the brothers Jack and David Roy, Raymond Bulambula and Alfred Walpay. David Yarrung Roy sculpts a lively group of Pied Imperial-Pigeons on a branch. Jack Roy has produced Whistling Ducks for the show, one emerging from a painted pond base. Bulambula’s Rainbow Bee-eater stands upright reaching for more of the native bees that make up its diet. Alfred Walpay is represented by his graceful Pied herons and a striking carved figure.

The Marrakata Warrior is emblematic of the renewed interest in the cultural history of Yolngu from the Mission time period and before. This piece and others in the exhibition have emerged from discussions around the Makarrata held in August 2016 at Yurrwi. This event between museums and institutions around the world and people from Milingimbi was held to facilitate a better understanding about the management of Yolngu cultural material.  The institutional Makarrata was based on a traditional peace making or resolution of conflicts ceremony. According to Chris Durkin, The Art Centre manager, one impact of the event has been the forming of relationships. ‘This engagement has had real tangible results.’ The artists are producing new works and curators are producing new exhibitions based on Milingimbi art like Vanessa Russ’ exhibition and catalogue Milingimbi: A Living Culture from the Berndt Museum and Cara Pinchbeck’s exhibition and catalogue Milingimbi: Taking Memories Back from the Art Gallery of New South Wales in Sydney.

Walpay’s figure is holding a classic gay’it or shovel-nosed spear completed with beeswax. Features of the figure have been made with a resin like substance made from the sap of billygoat plum trees. His hair is made from bark fibre from the Kurrajong tree. Gupapuyngu Daygurrgurr designs are painted on the base on which the the warrior stands.

Many of the paintings in the exhibition have been inspired by images of works from past artists that have been brought to Milingimbi by curators during the Makarrata. Some of the images brought from Cara Pinchbeck from the Art Gallery of New South Wales have particularly inspired some of the artists. The daughters of the late Djambarrpuyngu artist Binyinyuwuy have been painting after having reproductions and in some cases seeing the actual works of their father. Margaret Matay has painted Rain in the Trees and Judy Lirrininyin has painted Flying Fox Camp and Kulta Story. Of course artists are continuing to paint stories that are part of their everyday life such as Joe Dhamanydji’s Guku and Wunkurra and the painting of Milminydjarrk at Garriyak on his hollow log.

The other hollow logs in the exhibition come from the Garrawurra family of the Liyagawumirr clan. The women of this clan have inherited the right to paint designs related to the travels of the ancestral Djan’kawu Sisters in relation to the places, Garriyak and Dhambala, from their relative who died in 2006. Margaret Rrau and Sandra Manydjurrpuy both have painted the sacred waterhole at Garriyak on their hollow logs titled Milminydjarrk at Garriyak. Margaret’s sister Helen Ganalmirriwuy has painted the classic Garrawurra body paint design djirritidi.

The other major component of the exhibition is the variety of fibre work from fish traps to coiled and twined baskets. The fish traps made from pandanus are based on the ones made from jungle vine, flagellaria. Jennifer Roy and Zelda Wurgiur have modified the form and used dyed pandanus for their material. Classic and new techniques are represented in the fifteen baskets or bathi. Twined baskets are part of a long tradition of fibre forms in Arnhem Land with coiled baskets coming along with the appearance of missionaries. The process of making coiled baskets is around 100 years old in Arnhem Land and thus this technique now dominates the area. The Garrawurra women dominate this field of practice at Yurrwi, Helen Ganalmirriwuy, Margaret Rrau and Mandy Batjula. There is also a twined basket by Susan Balbunga.

This exhibition has something that should appeal to everyone from classical to new interpretations of ideas. A plain twined basket from Balbunga or new bathi mul, a black basket. Dangi’s Wagilag Story on bark or a new interpretation of a story on paper by Lirrininyin should interest painters. The sculpture by Walpay of the Makarrata warrior certainly is leading the way forward at Yurrwi. 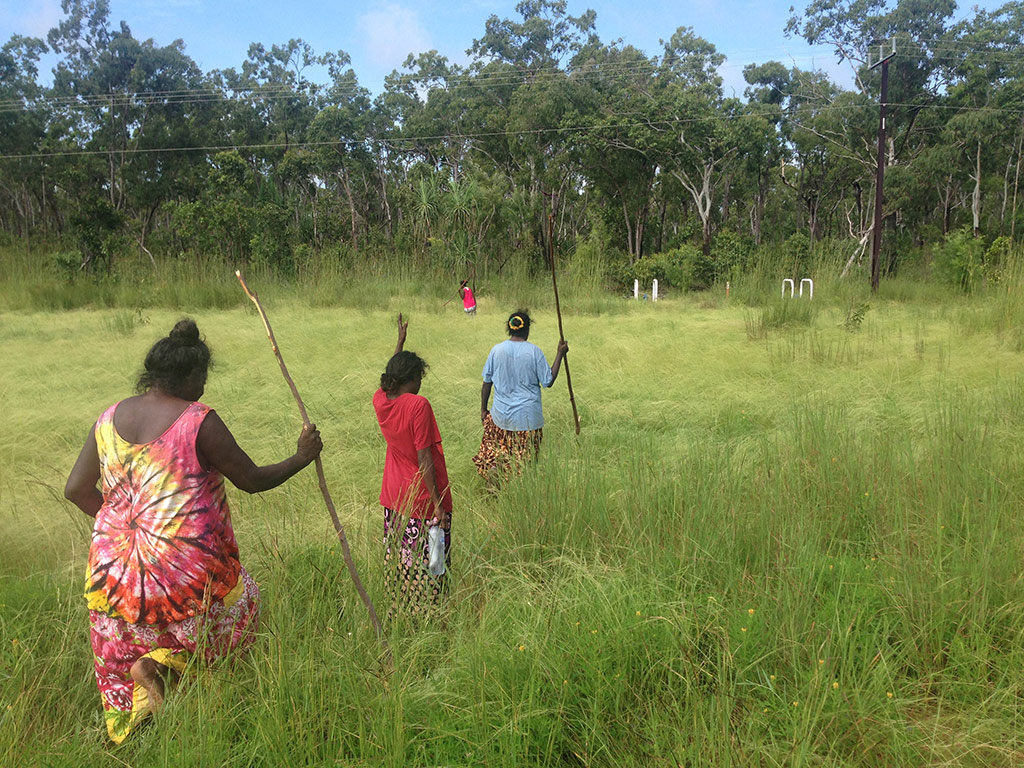 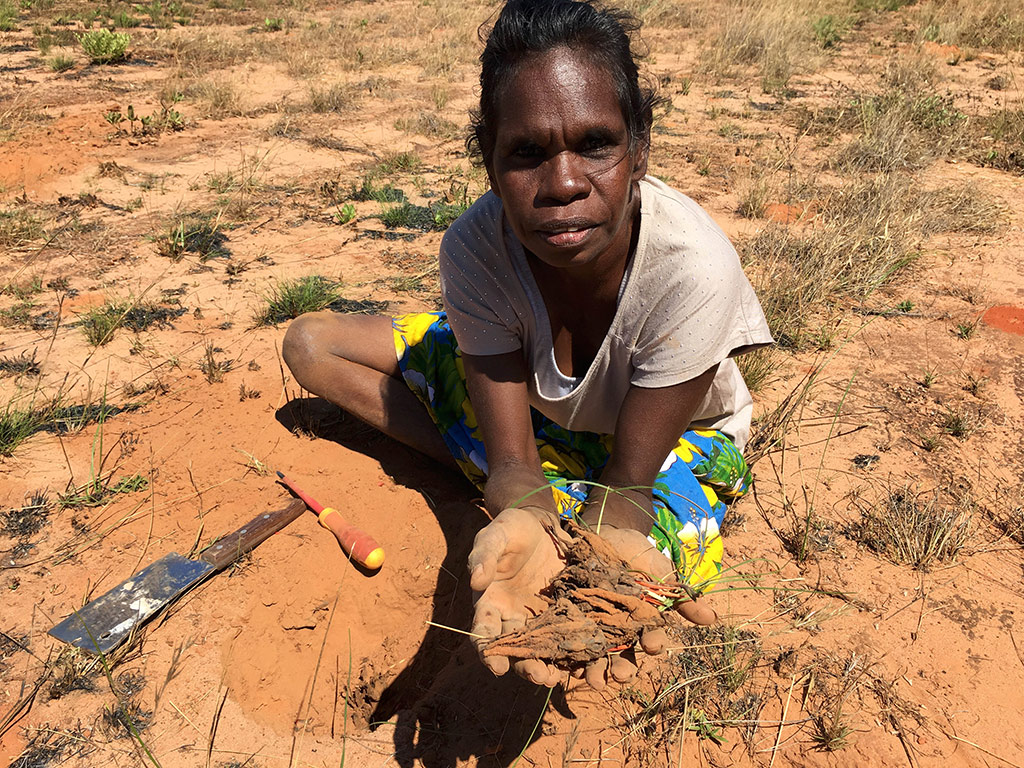 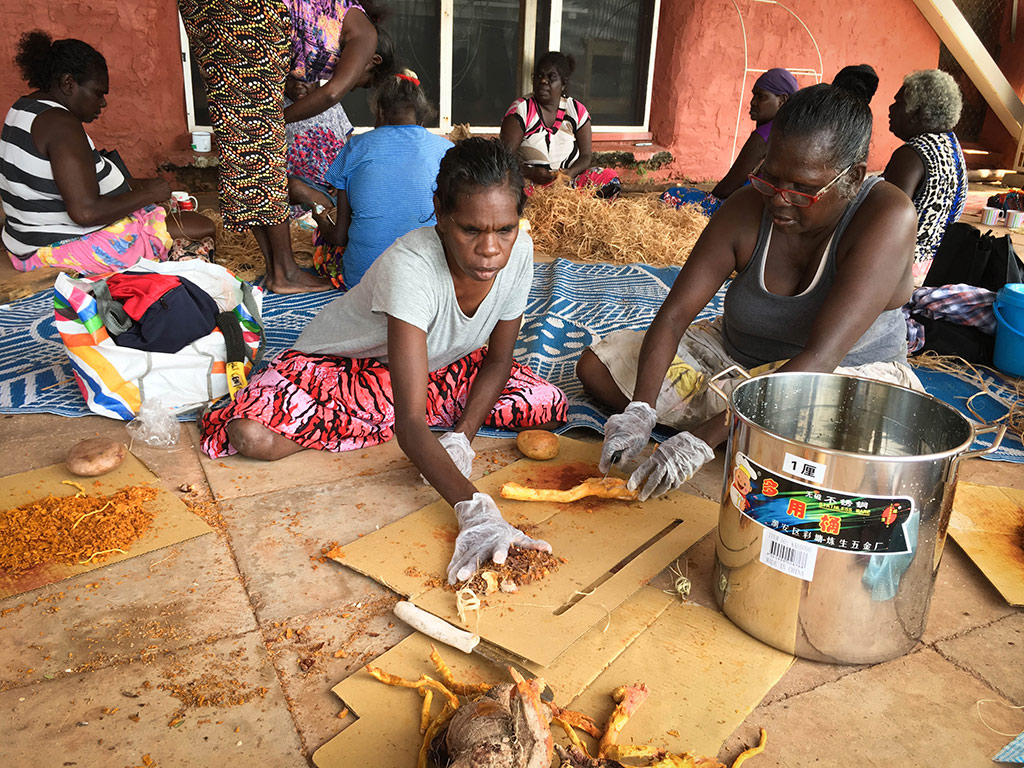 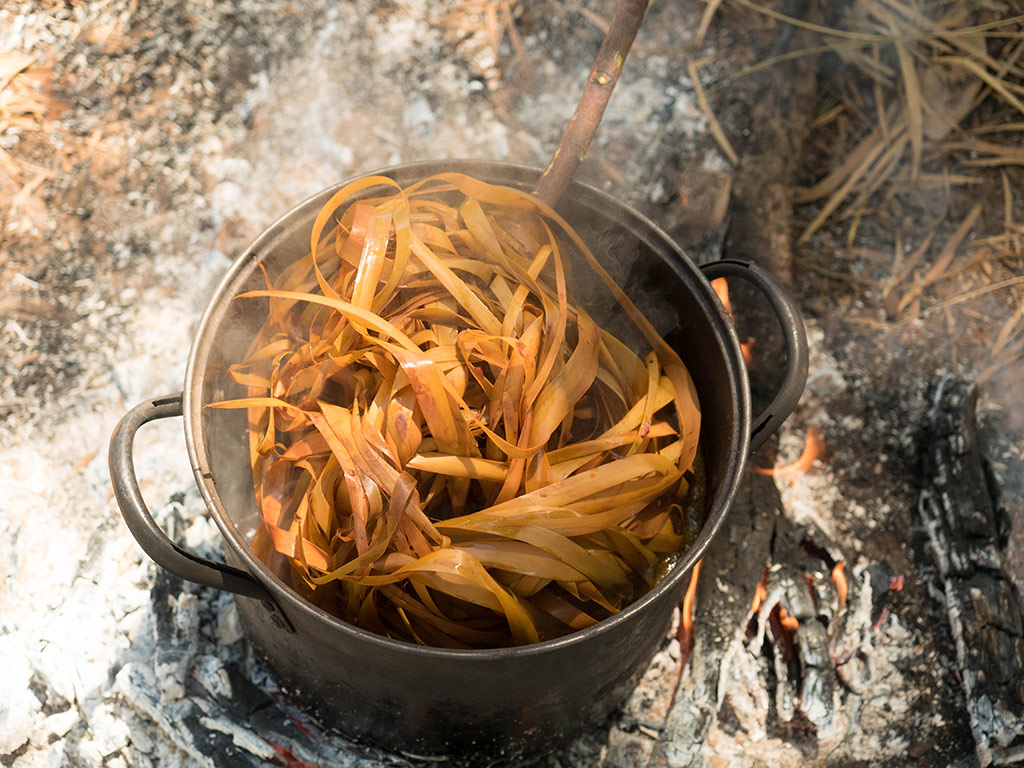