An Exploration of Personal Symbols of Freedom featuring David Jones

Since beginning printmaking, the idea of Butterfly Woman has been a developing idea and visual narrative recorded in a very few prints and drawings. The first etching was entitled Pull the Pin and completed in 2003. The butterfly symbolized the myriad Indigenous people’s artefacts impounded over time in government collections and displayed in museums. ‘Pulling the pin’ alluded to releasing these artefacts, stopping the practice, and returning those items, and Butterfly Woman was the protagonist.

As further prints were completed, Butterfly Woman came to embody the enduring spirit of freedom, and her ‘pulling the pin’ broadened in meaning to include the dream of release from the inequality faced by Indigenous people. Butterfly Woman, a purely fictitious entity, represents several memories of my family. My father’s mother taught me to recognise the black butterfly as a sign of good fortune. There were other bearers of news too, like the Willy Wagtail and Mopoke. Granny still had many words from our language and banderlain titchelen-gai marim, literally dancing coloured light, or in translation, butterfly is one of a few phrases and words I can remember from our talks.

My grandmother and father endured many hardships due their Indigenous heritage. Granny brought her two sons up in a Brisbane during WWII, a strong independent Indigenous widower, working three jobs to make ends meet. Dad wound up in Brisbane again after an adventurous life in far north Queensland. His fight for our Dalungbarra lands consumed the remainder of his days. Their endurance, resilience and determination to retain culture is a legacy that drives my art practice today and underpins this exhibition.

Around three hundred butterflies have been cut out with a jewellery saw in order to give them all an individuality, and then etched and aquatinted, incidentally during NIADOC week. 250 will be printed in black and presented in a grid, pinned to the wall, to represent the time of Anglo-European invasion and continuing oppression of Indigenous cultures. Before and after this grid of butterflies will be over 675 butterflies printed in a kaleidoscope of colours that represent our past freedom and future dreams of autonomy and cultural assertion.

My grandmother called butterflies banderlain titchelen-gai marim or roughly translated, dancing coloured lights. These are some of the words I can recall from our conversations, some of the words passed down through everyday use. So the title of this show relates to both the importance of language in our understanding of who and where we are, and the freedom we seek as Indigenous peoples in the face of ongoing oppression and governmental control. The delicacy and lilt of the phrase describes the flight and our fleeting perception of a butterfly in passing and reminds me of how all Indigenous peoples of Australia once determined their own lives and futures, before the invasion, killing times, subsequent occupation, imprisonment and ongoing oppression. Progress has been won through protest, demonstration and legal battle with the Australian government by Indigenous and Islander leaders and activists such as Eddie Mabo, whom we celebrate on this 25th year after his success in disputing the concept of terra nullius in Australia and forcing the recognition of Native Title as it became known. The title reflects this dream of freedom from oppression and reminds me of the importance of language for cultural connection.

Australian Time, 2019 represents 250 years of oppression Indigenous peoples of Australia have had to endure. For my Grandmother the black butterfly signified the coming of luck, a windfall, good news. These 250 black butterflies are pinned against the wall just as our freedom and fortune as Indigenous peoples has been pinned down, constrained and diminished by an Australian government and by extension, Australian society and culture. No doubt life as an Indigenous person in Australian society as improved since my grandmother’s and father’s time, but not enough by far. So to relate this ongoing struggle and governmental control I decided to cut by hand one butterfly for each year out of copper. Each copper butterfly was then etched three times. From these plates then, the 250 prints were pulled. Another approximately 600 prints were then taken from the butterfly plates to constitute an infinity cloud of many coloured butterflies to represent our Indigenous existence and presence in this land forever into the future and more than 60,000 years already. 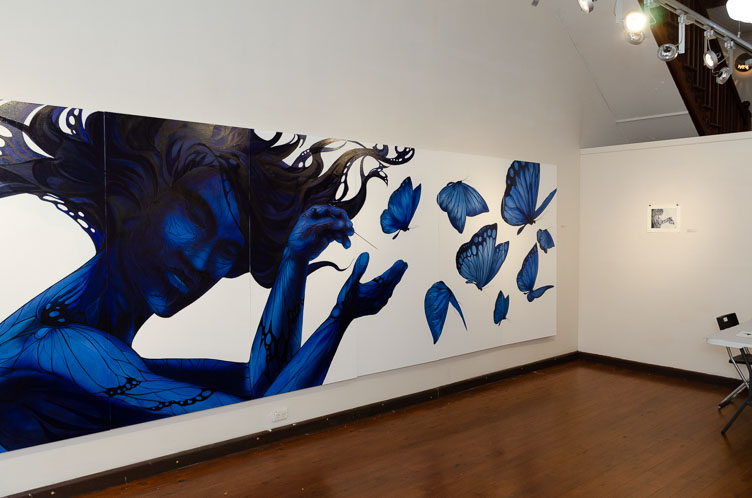 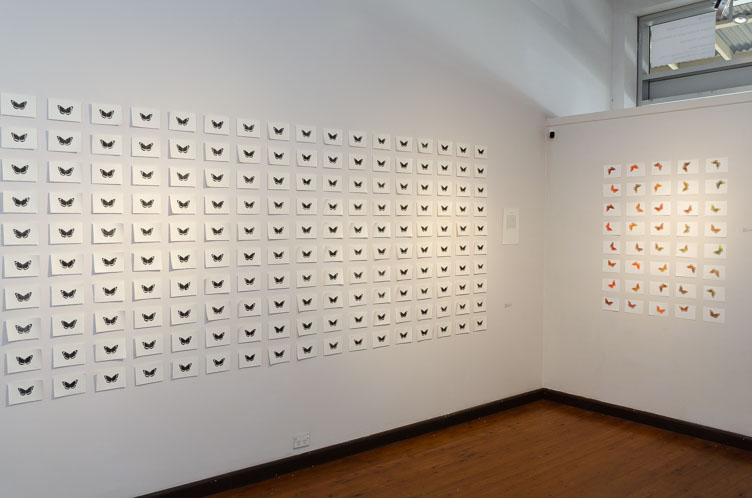 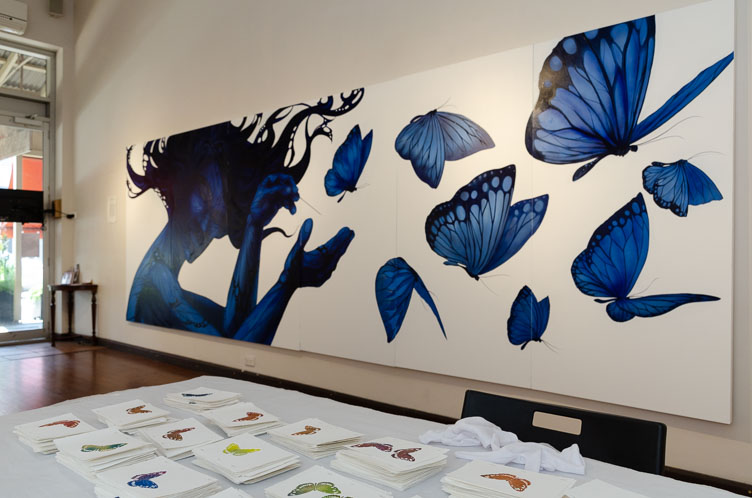 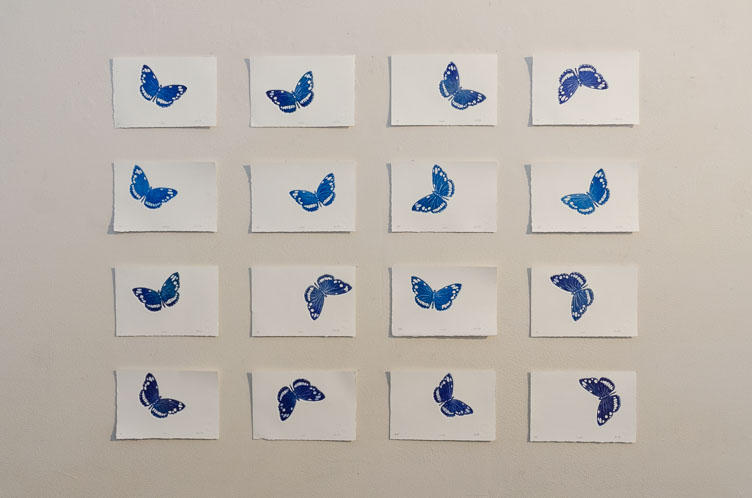 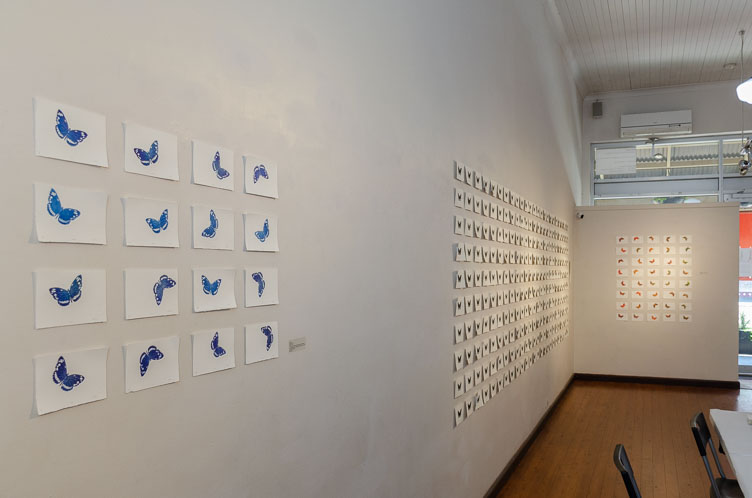 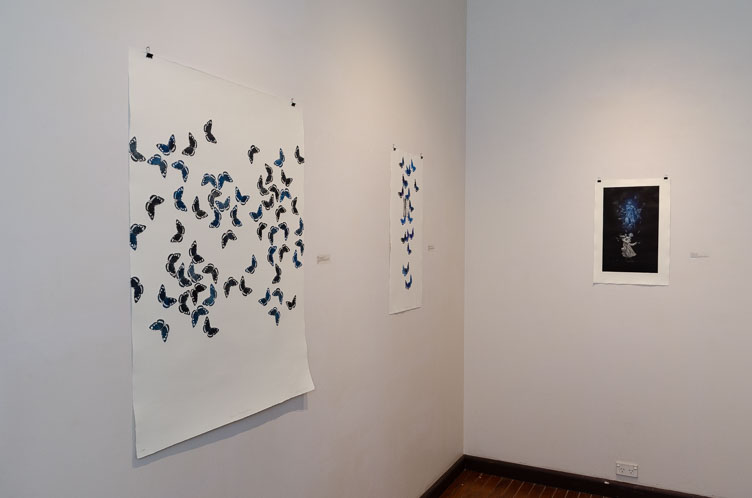